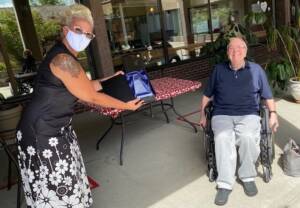 Joe Pearson knows a thing or two about real estate.

“We typically award, on average, 11 25-year pins each year. We have awarded 30-year pins, even the occasional 40-year pin. It is very rarely that we have the privilege of awarding a 50-year pin,” said Heizmann. “In fact, we found it difficult to recall the last time we acknowledged 50 years of service at OMREB.”

According to the Real Estate Council of BC, Pearson holds licence No. 011543.

Heizmann noted one of the latest licences issued is No. 185034.

A lot has changed in those 50 years.

Six hundred of OMREB’s current members hadn’t been born yet.

“Joe is a well-respected realtor,” said Heizmann. “He has not only provided exemplary service to his own residential and commercial clients, but he has also served our industry – on the OMREB board, where he was president in 2003; on the professional conduct committee, and in other capacities. He has also volunteered at the provincial and national level. And although fully entitled to rest on his many laurels, Joe returned to serve, one more time on the OMREB board having been elected earlier this year.

“A remarkable record of service and dedication.”