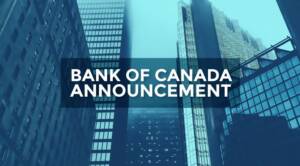 December 4, 2019 – The Bank of Canada kept its key interest rate on hold where it has been for more than a year as ongoing trade conflicts and related uncertainty continue to be a pressure on the global economy. The central bank’s overnight rate target has been set at 1.75% since October of last year.

The Bank of Canada said there is strong evidence that the global economy is stabilizing. This news is an indicator that growth is still expected to edge higher over the next couple of years.

“Financial markets have been supported by central bank actions and waning recession concerns, while being buffeted by news on the trade front,” the Bank said.

“Indeed, ongoing trade conflicts and related uncertainty are still weighing on global economic activity, and remain the biggest source of risk to the outlook.”

Meanwhile, the Canadian economy has allowed the Bank of Canada to keep interest rates on hold. This despite many of its international peers moving rates to ease monetary policy amid concerns about the global economy.

Economic growth in Canada slowed in the third quarter to an annual pace of 1.3%. This is in line with the Bank of Canada’s forecast in October. Consumer spending and housing helped support growth in the quarter. The central bank also noted that investment spending came in stronger than expected.

Statistics Canada reported last week that growth in the third quarter came as business investment rose 2.6%. This growth was at its fastest pace since the fourth quarter of 2017.

“The bank will be assessing the extent to which this points to renewed momentum in investment,” the Bank of Canada said.

“Future interest rate decisions will be guided by the bank’s continuing assessment of the adverse impact of trade conflicts against the sources of resilience in the Canadian economy — notably consumer spending and housing activity.”

What does that mean to you as a prospective buyer or homeowner? Well, changes in the Bank of Canada’s overnight rate affect the prime rates at the big banks.  Those have a direct impact and effect on the rates you pay for variable-rate mortgages and other floating-rate loans.

The next scheduled date for announcing the overnight rate target is January 22, 2020. The next full update will also include the outlook for the economy and inflation.